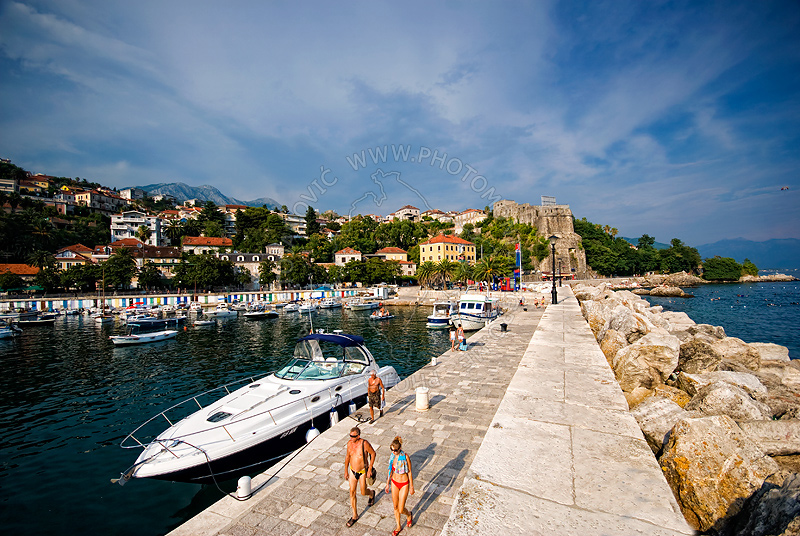 Herceg Novi (Cyrilic: Херцег Нови; Italian: Castelnuovo; Greek: Νεοκαστρον, Neòkastron) is a coastal town in Montenegro located at the entrance to the Bay of Kotor and at the foot of Mount Orjen. It is the administrative center of the Herceg-Novi municipality with around 33,000 inhabitants. Herceg Novi was known as Castelnuovo (“New castle” in Italian) (1420 – 1797). Herceg Novi has had a turbulent past, despite being one of the youngest settlements on the Adriatic. A history of varied occupations has created a blend of diverse and picturesque architectural style in the city.

Herceg Novi is a major Montenegrin tourist destination. It is well known as a spa and health center; nearby Igalo has an abundance of healing sea mud called “igaljsko blato” (Igalo mud) and mineral water springs called “igaljske slatine” (Igalo water springs). The most famous tourist attractions in Herceg Novi are castle Forte Mare built by the Bosnian king Tvrtko I in 1382, a clock tower built by Austrians in 19th century, the Kanli tower built by Turks, and the Serbian church St. Michael Archangel in central Belavista Square.

Whilst the city itself is not a major destination for sunbathing, with no long sandy beaches along the rest of the Boka Kotorska bay, many beaches are reachable by boat. Tourist companies organise one-day boat trips to Luštica peninsula, which lies opposite to the town. Popular Luštica peninsula beach sites include Žanjic, Mirište and Rose. Herceg Novi accounted for one-third of overnight stays in Montenegro before the Yugoslav wars, but the situation has changed since in favour of Budva, Kotor and other resorts in the northern part of the coast. The biggest issue facing tourism in Herceg Novi is a constant shortage of tap water, which is imported from Croatia. The city’s inability to pay for the water from Konavle results in frequent cut-offs of water and dry taps, especially during the peak of the summer season.