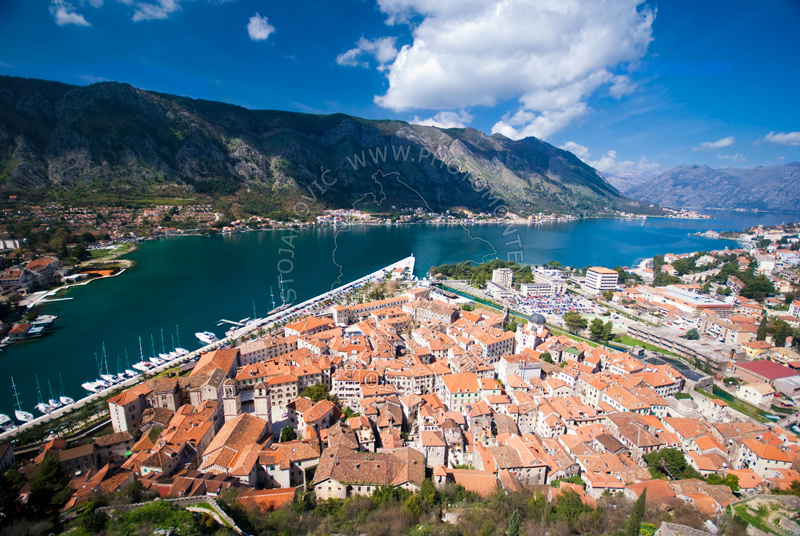 Kotor (Montenegrin: Котор / Kotor; Latin: Acruvium; Greek: Ασκρηβιον, Askrèvion; Italian: Cattaro) is a coastal town in Montenegro. It is located in a most secluded part of Gulf of Kotor. The town has a population of 13,510, and is the administrative center of the Kotor municipality.The old Mediterranean port of Kotor, surrounded by an impressive city wall built by Republic of Venice and the Venetian influence remains dominant among the architectural influences. The Bay of Kotor (Boka Kotorska), one of the most indented parts of the Adriatic Sea is sometimes called the southern-most fjord in Europe (though it is actually a submerged river canyon). With the nearly overhanging limestone cliffs of Orjen and Lovćen one of the great Mediterranean landscapes is created.

In recent years, Kotor has seen a steady increase in tourists attracted by both the natural beauty of the Gulf of Kotor and the old town of Kotor itself.

Kotor is part the World Heritage Site Natural and Culturo-Historical Region of Kotor.

Kotor is one of major tourist destination in Montenegro. It has one of the best preserved medieval old towns in the Adriatic and is a UNESCO world heritage sites. It has numerous other sights, such as the Cathedral of Saint Tryphon in the old town (built in 1166), and ancient walls which stretch 4.5 kilometres (2.8 mi) directly above the city. Sveti Đorđe and Gospa od Škrpijela islets off the coast of Perast are also among the more popular destinations in the vicinity of Kotor.

The old town is filled with bars, restaurants and cafes, and there are many nightclubs in Kotor. Summer events, such as Summer Carnival or Bokeljska Noć, are visited by thousands of tourists. These are the most visited happenings in Montenegro during the summer, with over 30,000 people partying in Kotor during Summer Carnival. Kotor with Budva hosted the Federation of European Carnival Cities (FECC) World Carnival City Congress in May 2009

Kotor is not a premium destination for sunbathing, as there are no sandy beaches and the water is not of reasonable quality in this part of the Bay of Kotor. However, some of the beaches on the Budva Riviera are no more than half an hour’s drive away.