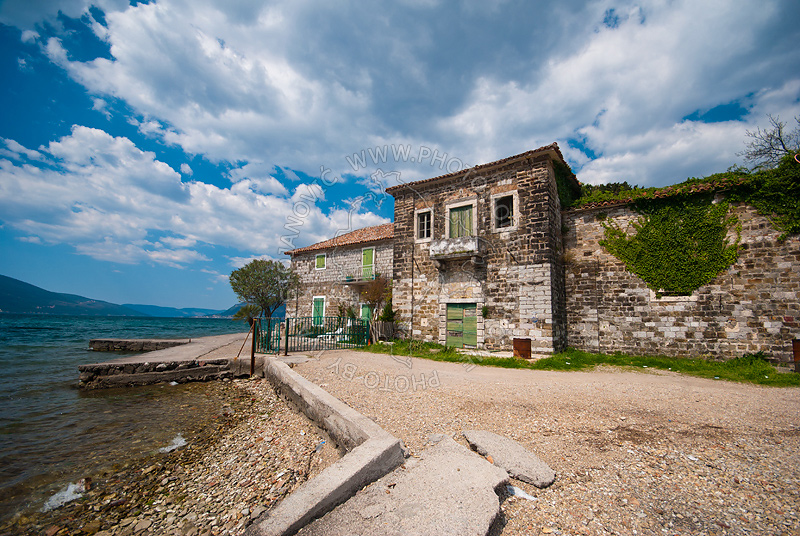 Verona House is located in the area called Račica. It was built by the sea, in an isolated location. Although the greater part of the house has been unused and deserted for a long time, with its simple but elongated form, its proportions and architectural style, the house reflects the features of the Gothic-Renaissance period in which it was built. The house belonged to the noble family Bizanti from Kotor. In about 1760, Captain Anton Andrijin Verona from Prčanj bought the house together with the whole estate that the Bizanti family had in the Tivat area.

Verona house is a two-storey construction consisting of three parts: an emphasised central part, covered with a hipped roof and wings of unequal lengths, lower than the central part and covered with gable roofs. The house was made of stone in shades of grey and green. The original, centrally set Gothic portal with pointed arches was replaced probably after 1760 by a new “bugnato” Baroque portal. The arched part of this new portal was later sealed up and a stone architrave added to the portal. The portal in the central part of the building, on the side facing the enclosed garden, has kept its original Gothic appearance without much change.

Although it has lost much of its authentic appearance, Verona house, with its spacious enclosed garden, a “mandrać” (an enclosure for boats), a threshing floor and wells, reflects to a great degree the way of life as might have been for the medieval noble families of Kotor on their estates in the Tivat Bay area.