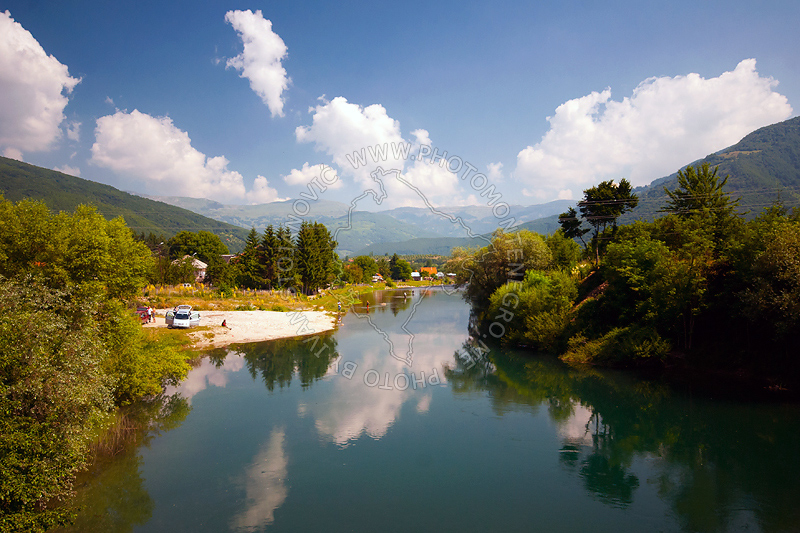 Lim (Montenegrin and Serbian: Лим, Lim) is a river flowing through Montenegro, Albania, Serbia and Bosnia and Herzegovina. 220 km (137 mi) long, it’s the right and the longest tributary of the Drina.The Lim originates below Maglić peak in the Kuči area of eastern Montenegro, very close to the Albanian border, under the name of Vrmoša. Its source is only few kilometers away from the source of the Tara river, but the two rivers go in opposite directions: the Tara to the north-west and the Vrmoša to the east, and after only few kilometers it crosses over to Albania (Albanian: Lumi i Vermoshit). Passing through Prokletije mountains and the village of Vermosh, it re-enters Montenegro under the name of Grnčar. Receiving stream Vruje from the right at Gusinje, it continues as Ljuča for a few more kilometers where it empties into the Lake Plav, creating small delta. It flows out of the lake to the north, next to the high mountain Visitor, under the name Lim for the remaining 197 km (122 mi). It passes through Murino, continuing generally to the north through areas of Vasojevići, Gornji Kolašin, Donji Kolašin and Komarani, the Tivran gorge and the cities of Andrijevica, Berane, Bijelo Polje, Resnik and Nedakusi, entering Serbia between villages of Dobrakovo and Gostun. It receives the right tributaries of Lješnica (between the villages of Poda and Skakavac) and Bistrica (near the border) and left tributary of Ljuboviđa, near Bijelo Polje.Lim belongs to the Black Sea drainage basin through Drina, Sava and Danube. Its drainage basin covers 5,963 km2 (2,302 sq mi) and the river is not navigable.

It receives many smaller streams in Montenegro and Bosnia and Herzegovina, however, two most important being two of its right tributaries in Serbia, Uvac and Mileševska reka.

Though today is generally considered that the river’s name is derived from Latin word limes, which means border, it might originated from the Celtic root llyn or llym, meaning drink or water.