The Mala Rijeka viaduct is a viaduct on the Belgrade – Bar railway, located some 20km north of Podgorica.The project was started in 1969 and was completed in 1973. It is the tallest railway viaduct in the world. (This record height was held by the Fades viaduct in France). It is 498.8 metres (1,636 ft) long and rises 200 metres (660 ft) above the Mala Rijeka (meaning literally Little river). It is also the longest bridge on the Belgrade – Bar railway.36,000 m³ of concrete and 100,000 tons of steel were built into the bridge. The largest of four pillars, upon which the bridge lies, has a base bigger than a tennis court. Belgian extreme sportist Cedric Dumont was the first person ever to base jump from the bridge (on September 11th, 2008). 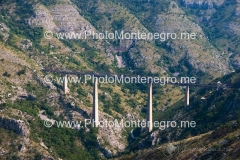