The Piva (Montenegrin Cyrillic: Пива) is a river in Montenegro and Bosnia and Herzegovina, shorter headwater of the Drina river, which it forms with the Tara river on the border with Bosnia and Herzegovina.The Piva springs from the Sinjac (Cyrillic: Сињац) spring on Golija mountain, near the Monastery of Piva (also called Vrelo Pive; Cyrillic: Врело Пиве; Well of Piva). Before the artificial Lake Piva was formed, the water from the well rushed into the river Komarnica (Cyrillic: Комарница) thus creating the Piva river for the next 34 km. However, Komarnica is part of a 86 km long river system (Tušina-Bukovica-Bijela-Komarnica), so measured from the source of the Tušina river (Cyrillic: Тушина), the Piva, nicknamed ‘the river with five names’ is 120 km long.

The Tušina originates from the mountain Sinjajevina in the Uskoci region of central Montenegro, just few kilometers away from the source of another important Montenegrin river, Morača. The river flows to the west, between the Sinjajevina and Lola mountains, next to the villages of Krnja Jela, Bare, Boan and Tušina. It receives from the north the Bukovica river (Cyrillic: Буковица), and continues further under this name. After the river passes the regional center of Šavnik and the villages of Gradac and Pridvorica in the region of Drobnjaci, the stream receives from the north the Komarnica and takes its name.

Bridge over the Piva River canyon

The Komarnica continues between the mountains of Vojnik and Treskavac, in an almost uninhabited area (village of Duži) and enters the high Piva Pleateau, where it turns north (almost all of the Komarnica’s course is flooded by the reservoir of the Lake Piva), receives from the right outflow of the Piva well and enters the deep Piva canyon.

The canyon is cut between the mountains of Bioč, Volujak, Maglić and Pivska planina, its 33 km long, deep up to 1.200 m and river generates immense power used for the power station of Mratinje (342 MW) which dammed the canyon in 1975. The dam is 220 m high, one of the highest in Europe and creates Lake Piva, third largest in Serbia and Montenegro (12,5 km², altitude 675 m, 188 m deep), which flooded the old location of the monastery of Piva from the XVI century, so the monastery was moved to the new one. The Vrbnica river flows from the left into the lake.

After the dam, the Piva continues straight to the north, meets the Tara at Šćepan Polje on the border with Bosnia and Herzegovina and creates the Drina.

The Piva belongs to the Black Sea drainage basin with its own drainage area of 1.270 km² and is not navigable. 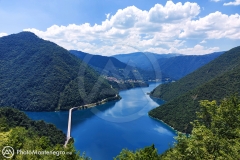 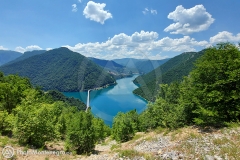