Podgorica’s favourable position at the confluence of the Ribnica and Morača rivers and the meeting point of the fertile Zeta Plain and Bjelopavlići Valley has encouraged settlement. The city is close to winter ski centres in the north and seaside resorts on the Adriatic Sea.

A census in 2003 put the city’s population at 136,473. The municipality of Podgorica contains 10.4% of Montenegro’s territory and 27.3% of its population. It is the administrative centre of Montenegro and its economic, cultural and educational focus.

The name Podgorica means “under the Gorica” in the Montenegrin language. Gorica/goritsa (meaning “little mountain”) is the name of the hill that overlooks the city centre.

Some three kilometres (1.9 miles) north-west of Podgorica lie the ruins of Doclea, a town known in Greek, pre-Roman and Roman times. The Roman Emperor Diocletian came from this region. In later centuries, Romans “corrected” the name to Dioclea, guessing wrongly that an “i” had been lost in vulgar speech. “Duklja” is the later (Slavic) version of that word.

When founded (before the 11th century), the town was called Birziminium. In the Middle Ages, it was known as Ribnica. The name Podgorica was used from 1326. From 1946 to 1992, the city was named Titograd in honor of Josip Broz Tito, the former President of Yugoslavia.

Podgorica is at the crossroads of several historically important routes, near the rivers Zeta, Morača, Cijevna, Ribnica, and Sitnica, in the valley of Skadar lake and near the Adriatic Sea, in fertile lowlands with favourable climate. The earliest human settlements were in prehistory: the oldest physical remains are from the late Stone Age. In the Illyrian age, the area between the Zeta and Bjelopavlići valleys was occupied by two Illyrian tribes, the Labeates and the Docleats. 3 kilometres (1.9 mi) northwest of today’s Podgorica and which reflected the local terrain. The population of the city was 8,000-10,000, in which all core urban issues were resolved. The high population density (in an area of about 10 km/6 mi radius) was made possible by the geographical position, favourable climate and economic conditions and by the defensive positions that were of great importance at that time.

From the 5th century, with the arrival of the first Slavic and Avar tribes and the beginning of the break-up of the Roman Empire, the area bore witness to many noteworthy events. With time, the fortifications ceased their function and new towns were built. Slavic groups in the area were in constant war with Byzantium and tended to establish a new state. The result was establishment of a new settlement that was probably named after the river Ribnica on whose banks it was built. The first mention of Ribnica is during the rule of the Serbian royal family of the Nemanjići. The importance of Ribnica was its position as crossroads in communications with the west. In occupying these areas, the Slavs created a new state and developed their own culture and art, acceptable to the mediaeval church and feudal class.

The name Podgorica was first mentioned in 1326 in a court document of the Kotor archives. The city was economically strong: trade routes between Dubrovnik and the State of Nemanjici, well developed at that time, were maintained via the road that led to Podgorica through Trebinje and Nikšić. As a busy crossroads, Podgorica was a vibrant regional centre of trade and communication. This boosted its development, economic power, military strength and strategic importance. The Turkish occupation of Podgorica in 1474 interrupted its economic, cultural and artistic development. The Turks built a large fortress in Podgorica and the existing settlement, with its highly developed merchant connections, became the main defensive and attacking bastion against rebellious tribes. The fortified city, with towers, gates and defensive ramparts, enabled the Turks to resist all attacks. In 1864, Podgorica became a township (kaza) of İşkodra vilayet called Böğürtlen (Turkish “Blackberry”). It was also known Burguriçe in Albanian.

In accordance with the decision of the Berlin Congress in 1878, Podgorica was integrated into Montenegro, marking the end of four centuries of Turkish occupation, and the beginning of a new era in the development of Podgorica and Montenegro. The city developed quickly and became a strong marketplace. The first forms of capital concentration were seen. In 1904, Zetska savings bank, the first significant financial institution, was formed. It would soon grow into Podgorička bank. Roads were built to all neighbouring towns and, in 1902, a tobacco plant became Podgorica’s first significant commercial company.

World War I marked the end of dynamic development for Podgorica, by then the largest city in the newly proclaimed Kingdom of Montenegro. Podgorica was occupied, as was the rest of the country, by Austria-Hungary from 1916 to 1918. After the liberation by the allies in 1918, a controversial Podgorica Assembly was held at Podgorica Tobacco Monopoly building. The assembly marked the end of Montenegrin statehood, as Montenegro was merged with Serbia and incorporated in the Kingdom of Yugoslavia. Between the two world wars, the population of Podgorica was about 13,000.

Podgorica suffered heavily during World War II; the city was bombed over 70 times throughout the course of the war and razed to the ground, causing the deaths of over 4,100 people. The city was liberated on December 19, 1944.

Under the name of Titograd, the city became the capital of the Socialist Republic of Montenegro on 13 July 1946. A period of unprecedented expansion followed, which marked the SFRY era: the population increased dramatically, the city was heavily industrialized, infrastructure was improved, and health, educational, and cultural institutions were founded. The city rapidly became the commercial, socio-economic and cultural centre of the country. The progress halted again when the break-up of SFRY began in the 1990s. The name of Podgorica was reinstated on April 2, 1992.

The destructive Yugoslav wars bypassed Montenegro, but the entire country was greatly affected economically. A period of severe economic stagnation lasted throughout the 1990s. The economy began to recover in the early years of the 21st century, when Podgorica began to emerge as a modern, pro-western city. Following the successful independence referendum in May 2006, Podgorica became the official capital of an independent state, boosting its status as a regional centre and raising its economic prospects.

Podgorica is located in central Montenegro. The area is crossed with rivers and the city itself is only 15 kilometres (9.3 mi) north of Lake Skadar. The Morača and Ribnica rivers flow through the city, while the Zeta, Cijevna, Sitnica and Mareza flow nearby. This richness in bodies of water is a major feature of the city.

In contrast to most of Montenegro, Podgorica lies in a mainly flat area at the northern end of the Zeta plain. The only exceptions are hills which overlook the city. The most significant is Gorica Hill (107 m/351 ft), which rises above the city centre. The other hills include Malo brdo (Little hill), Velje brdo (Big hill), Ljubović and Čardak. In the main, these are too steep for development and thus limit the city’s expansion, especially to the north.

Podgorica’s mixture of architectural styles reflects the turbulent history of the city and country: as one régime replaced another, the corresponding style was introduced.

As part of the Ottoman Empire until 1878, Podgorica has many examples of Turkish architecture. The oldest parts of the city, Stara Varoš (Old town) and Drač are typical of this, with two mosques, a Turkish clock tower and narrow, winding streets.

When the city was incorporated to Montenegro, the urban core shifted to the other bank of the Ribnica River, where the town developed in a more European style: wider streets with an orthogonal layout. This part of the city is today traditionally regarded as city centre, and is called Nova Varoš (New town)

During World War II, Podgorica was almost razed to the ground, being bombed over 70 times. After liberation, rebuilding began as in other cities of the communist-ruled SFRY. Mass residential blocks were erected, with basic design typical of Eastern bloc countries. All that part of the city on the right bank of the Morača River was built this way. Even the empty spaces in the city centre were filled with near-brutalist structures, resulting in an unfortunate fusion of old and new. The residential and business blocks of the SFRY era provided ample housing but have been much criticized for their uninventive and grey appearance.

The main contemporary traffic arteries were laid out during this period, which extended the orthogonal street layout of city center, to the south and west. Residential and infrastructural developments in the SFRY era have mostly shaped the layout of today’s Podgorica, and accommodated the unprecedented population growth that followed World War II.

However, in area surrounding residential blocks, the city expanded in a form of often chaotic urban sprawl, with densely built private lowrise dwellings leaving little space for streets and sidewalks. The trend of sprawling informal settlements was at peak during the 1990s. Efforts have been made since to improve the infrastructure of those settlements, but many problems remain, especially in large lowrise neighbourhoods in north and northeast Podgorica.

A major advance in Podgorica architecture began in the late 1990s and, since then, the face of the city has changed rapidly. Residential and business construction are proceeding rapidly, incorporating contemporary glass-and-steel architectural trends. In an effort to create a recognizable and modern state capital, city officials are routing significant investments in city’s public spaces. Thus, the city has gained entirely new squares, parks and monuments. New landmarks include the Hristovog Vaskrsenja orthodox temple and the Millennium Bridge, the main feature of the Podgorica skyline. Podgorica today is transforming rapidly from a featureless town to a modern European capital. 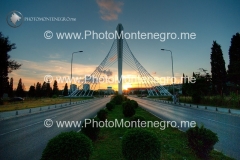 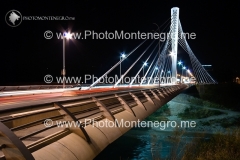 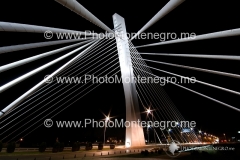 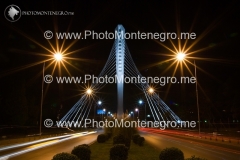 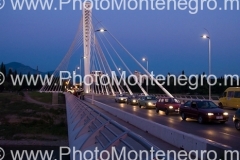 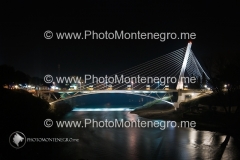 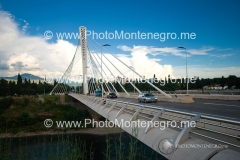 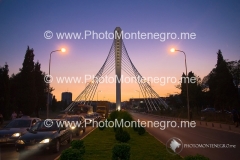 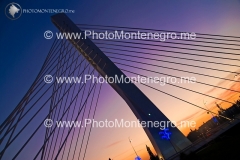 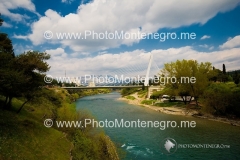