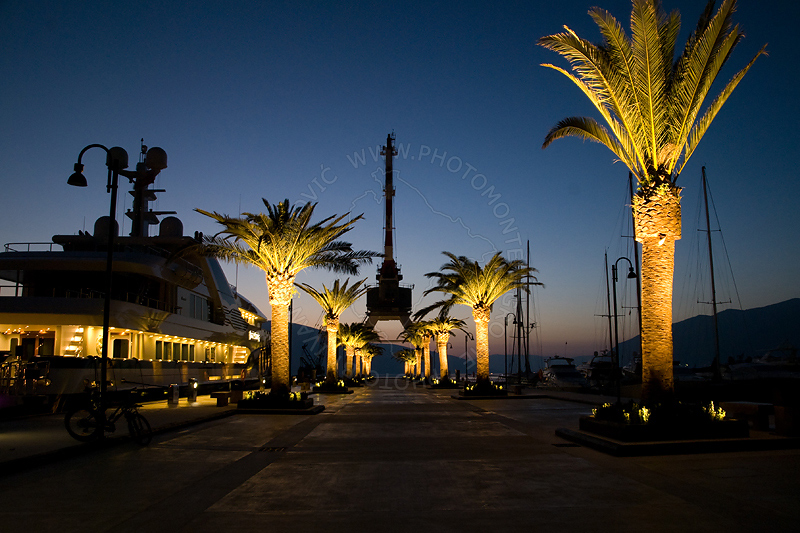 The construction site was a naval shipyard named Arsenal, which fell into disuse after the Yugoslav Wars and the decline of the SFR Yugoslav Navy. The attractive lot on which the shipyard is situated was put on public offering in 2006, and was bought by Canadian businessman Peter Munk. It was acknowledged in 2008 that he was not alone in the venture – while Munk owns 54% of the Porto Montenegro company, the rest is owned by Oleg Deripaska, Nathaniel Rothschild, Jacob Rothschild, Bernard Arnault, Sandro Demijan and Anthony Munk.

Munk announced that he intends to build a a luxury yacht marina and a waterfront community, which would cater to needs of growing community of superyacht owners. The favourable position of Tivat in the secluded part of Bay of Kotor, together with the proximity of Tivat Airport, makes it favourable location for a marina.

The planned waterfront community behind the main docks will feature a 150-room luxury hotel, about 250 condo units, conference centre, a market square, an art gallery, a museum, a sports complex and 10,000 square metres of retail space, including a supermarket and a department store.

Projects related to Porto Montenegro include an 18-hole golf course in the vicinity of Tivat Airport, and a possible acquisition of Bijela shipyard by Peter Munk, which should serve as a yacht maintenance facility.

Following an international architectural competition, ReardonSmith Architects[1] was appointed to master plan and design the entirely new marina resort and residential community of Porto Montenegro. A key to their success in winning this extraordinary project was the team’s interpretation of the town planning and massing of several historic towns in the region. The proposal respected both the local architectural inheritance and the natural habitat while creating something genuinely new and avoiding pastiche. In master planning the resort, the practice took as its guiding influence the seminal work of American urban planner Kevin Lynch, who described the human need to balance clarity and surprise in the city environment.

The first phase is focusing on the waterfront development and will include a 650-berth marina, 95,000 sq metres of prime residential space, retail and a luxury hotel. This initial phase is to be completed in two segments; with the first part concentrating on the residential development along the waterfront and the second part focusing on additional residential properties as well as the hotel. The first part of Phase One is scheduled for completion in 2010.

Virtually all the existing structures will be demolished and their stone and brick crushed to form aggregate; timbers will also be re-used. New construction will predominantly be in local stone and render with roofing in terracotta and clay tiles.