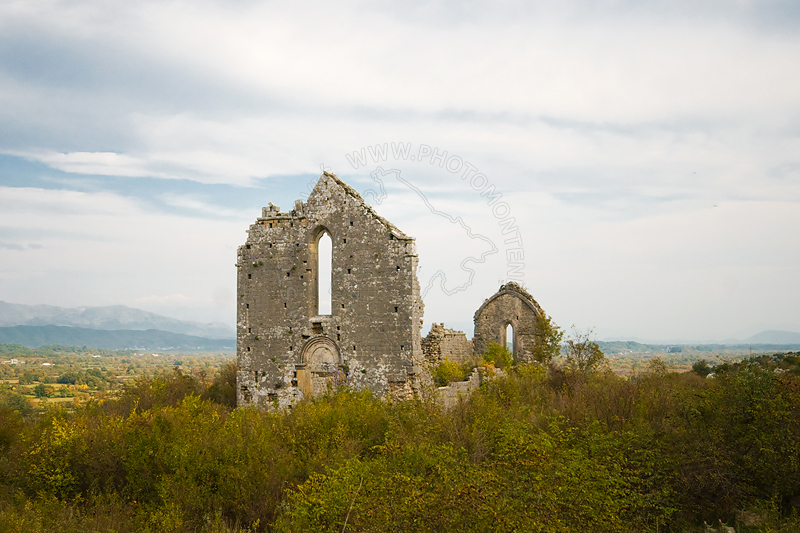 Svac – The Old Town of Sas. This medieval town near Ulcinj is situated on a plateau above Lake Sas and falls into the most appealing “dead towns” on the Adriatic coast.

Svac (Sas) was mentioned in the eleventh century as an episcopal town (Svacia Civitas). Around 1183 it was conquered by Stefan Nemanja who annexed it to Raska with other Zeta towns. The Mongolians razed it to the ground in 1242 in the course of their invasion of Ulcinj.

Svac was rebuilt, to be utterly devastated in 1571 when seized by the Turks.

According to a legend from the fourteenth and the fifteenth centuries, Svac used to have as many churches as there are days in a year. Today, one can discern in its ruins the foundations of eight churches, the two largest being the older Romanesque Cathedral Church of St. John (Shen Jovanit) located at the highest point of the town, and the younger Gothic-style Franciscan Church of St. Mary (Shen Mrise) situated on a plateau in the lower part of the town. They were both single-nave churches split in the middle into two parts by a low partition wall and covered by a ceiling. All churches in Svac were decorated with architectural ornaments and frescoes, and in some of them even today one may discern traces of colour on the walls. Archaeological research on this “dead” town has not been completed yet.