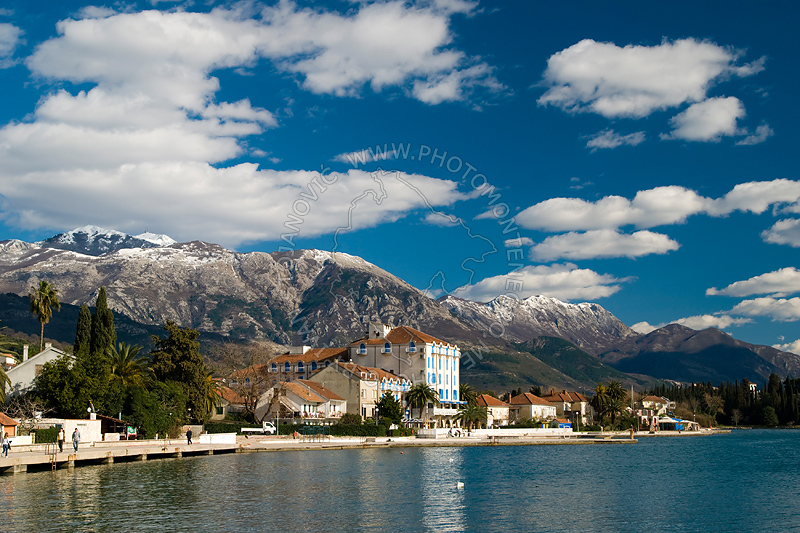 Tivat is a coastal town in southwest Montenegro, located in the Bay of Kotor. It has a population of 9,467 (2003 census).Tivat is the centre of Tivat municipality (population 13,630), which is the smallest municipality by area in Montenegro.

The origin of the name Tivat supposedly goes back to the 3rd century BC. The celtologists claim that the name “Tivat” comes from the Welsh (Celtic) word Tywod, meaning sand. Documents prove as well that Tivat was an important religious centre in the 14th and 15th centuries. The Monastery of St. Michael the Archangel was the seat of the Orthodox Archbishopric of Zeta.Tivat, the youngest town in the Boka area was established on the spacious plateau at the bottom of Vrmac. According to the archives of Kotor, the following names were mentioned here in the 14th century: Teude, Theode, and Theudo who are related to the queen Teuta. There are not many written traces of the events that happened in this region at the time of Houses of Nemanjić, Balšić, Crnojević, Venice, France, and Austrians.During the Middle Ages the fertile lands of the Tivat area belonged mostly to the aristocrats of Kotor, Prčanj and Dobrota. There were their big properties, castles, and chalets as well as the collective church of St. Anton dating from 1373. Part of this inheritance, which was the property of the wealthy Buča family, is a marvelous chalet which today houses Tivat’s museums and galleries. The residence of the metropolitan of the Zetan diocese was built from the 13th to the 15th century on Prevlaka Island.Tivat (called Teodo in the Venetian language), was under the Republic of Venice as a part of Albania Veneta from 1420 to 1797.

Tivat turned into a town by the end of 19th century when in 1889 the Naval arsenal was built by Austrians, and was later used as a naval military base of Yugoslav People’s Army, military of the Socialist Federal Republic of Yugoslavia, and Army of Montenegro.The JNA enjoyed an international reputation as a powerful, well-equipped, and well trained force. The base are also used by Russia and Libya as the technical base for the for maintenance, repair and overhaul (MRO) of ships and submarines. The new owner of the naval base, Canadian billionaire Peter Munk, announced that it will build in Tivat luxury marina for mega-yachts “Porto Montenegro “, which the city, he said, turning to “Monaco of southern Adriatic. “

Besides being a popular tourist resort for Slavic tourists, Tivat is set to become a nautical tourism centre of southern Adriatic. The inlets near Prevlaka, as well as the localities of Župa and Kalimanj, provide great conditions for the construction of marinas and yachting clubs. Canadian businessman Peter Munk has bought a naval shipyard in Tivat, and intends to transform it in luxury vacation resort and a marina for luxury yachts. In Tivat hinterlands, adjacent to Tivat Airport, golf courses have been planned, further shaping Tivats prospects as a luxury resort.

Beginning from 1971 the Tivat Airport acquired the modern runway and it is now a significant airport for foreign air traffic. It served 573,914 passengers in 2007.

Although it is the youngest town in the Boka region, Tivat has many interesting and attractive destinations. Renaissance Summer House Buca in the centre of city, Ostrvo Cvijeća (Flowers’ Island) with sacred monuments, Gornja Lastva, the old nucleus at an altitude of 300 m (984.25 ft), the magnificent sandy beach at Plavi Horizonti and the Sveti Marko Island with ex-Club Med cottages are the most visited tourist destinations in Tivat area. In the city itself there is the natural port Kalimanj. There is also a choice of cultural events, such as “Bocce Olympiad” and “Summer Fest”.

Tivat boasts a beautiful botanic garden thanks to the Bokan sailors who brought back a wide variety of exotic tree species and ornamental plants from their voyages around the globe.