The town is believed to have been founded in the 5th century BC by colonists from Colchis. The Colchian colonization is mentioned in the 3rd century BC, in a poem by Apollonius of Rhodos.

Illyrians lived in the region at the time, and under Greek influence built immense so-called Cyclopean Walls. In 163 BC, the Romans captured Colchinium from the Illyrian tribe of Olciniates and renamed the town Olcinium (aka Ulcinium) after the tribe. Under Roman rule the town received the status of Opidum Civium Romanorum (Town with Special Privileges), only to be later granted Municipium (Independent Town) status. When the Roman Empire was split in two, Olcinium became a part of the Eastern Roman Empire (later known as the Byzantine Empire).

Before the medieval period, Ulcinj was known as one of the pirate capitals of the Adriatic Sea. This is also seen during the later period of Illyrian Kingdom. Inhabitants of Ulcinj were known at the time of Christ, especially from 20 BC to around 300 AD, to be very confrontational to those who were foreigners to their land; they were especially meticulous about border disputes as well.

In 1183, Rascian Grand Duke Stefan Nemanja conquered Olcinium and the town prospered as one of the most significant coastal towns. Ulcinj remained in Nemanjic hands till Emperor Dušan’s death in late 1355. In 1356, Lord Balša I, the founder of the Zetan Balšić dynasty, was granted parts of former Dioclean territory, including Ulcinj, by Emperor Dušan’s son and successor, Emperor Uros VI, and broke away from the Serbian Empire, only to establish an independent lordship called Zeta. Under Balšić’s control, Ulcinj served as a popular resort, as well as a mint. The Republic of Venice captured Ulcinj from Balša III of the Zetan Balšić dynasty in 1423. Venice controlled Dulcigno (as it was called in the Venetian language) until 1571 and incorporated the city in the Albania Veneta. Under Venetian control.

In medieval time, a shipwreck of a Saracen ship on the shores of Ulcinj with stranded African slaves; locals saved the surviving Africans and made them an integral part of the population of the town.

In 1571, the Ottoman Turks conquered Dulcigno from the Venetians. In 1867, Ulcinj became a kaza of the İşkodra sanjak of Rumeli veyalet. Ulcinj finally gained its independence from the Turks on 11 January 1878 by the decision of the Berlin Congress (see Treaty of Berlin (1878)), only to be fully integrated into Montenegro nearly three years later, on 30 November 1880.

In the summer time, Ulcinj is a popular tourist destination. Although still undiscovered by many travelers from larger countries, repeat tourists and an increasing amount of first time visitors make Ulcinj a hot spot for vacationers between the months of May and September. It is most famous for its beaches, which are considered the most beautiful in Montenegro. The most valuable resource of the Ulcinj riviera is Velika plaža / Plazha e Madhe (literally “Big Beach”), which is a 12 km (7.5 mi) long portion of sandy beach – the longest on the Montenegrin coast. There is also a beach that holds the name Mala Plaža (“Plazha Vogel”) which is much smaller in size, but is very popular with visitors. “The Korzo” as it is called by locals, is a strip-like walkway ligning the small beach. At night during the summer months, young tourists walk past one another while bright lights decorate the street and live music invades their ear drums. It is said that some of the most beautiful girls in South Eastern Europe, visiting Ulcinj as tourists, can be found walking about the Korzo on a nightly basis. There are many more less known smaller beaches that serve as a get-away to many people looking to catch their breath.

The Castle of Ulcinj

Ulcinj’s old town is a very well preserved castle-looking community that is left over from medieval times. The old town sits atop a mountain overlooking the shore and is a tourist attraction on its own.

Ada Bojana(Albanian Buna) is popular among foreign tourists from Western Europe for its peace and unique atmosphere.

Šaško lake and Ulcinj’s salt pond are popular among birdwatchers, because Ulcinj and its surroundings are major resting points for over 200 bird species on their migration paths.

There are numerous pubs, dance clubs, and bars that dot the city that are usually filled to capacity throughout the summer.

The majority of tourists in Ulcinj are Albanians, Germans, Italians, and Eastern Europeans.

A large number of Americans who are either of Albanian descent or were born in or near the city of Ulcinj often make the city a prime summer time destination.

The sandy beaches Ultsinya, approximately 17 kilometers long, have become a trademark of Montenegro’s southern coast. However, few tourists know that in these places there is a beach called «female» [1]. In a small pebble bay, hidden by rocks, for more than a century women came for infertility treatment … 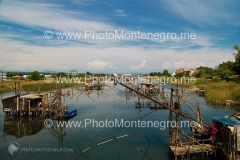